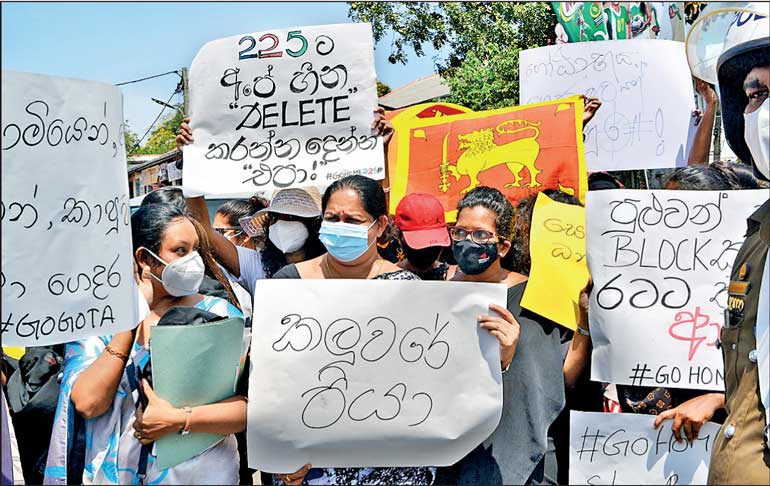 Women are at the forefront of dealing with this crisis in gas queues, queues for essential food items and in protests – Pic by Shehan Gunasekara

Sri Lanka is facing the worst economic crisis in its post-independence history. Widespread food and fuel shortages are crippling the lives of people. Such a situation that has already lasted several weeks is now resulting in widespread protests which are being repressed violently. We anticipate escalating violence in the context of the spread of peaceful protests by average citizens to express democratic dissent against this unjust situation. On the whole, we are witnessing the unfolding of a humanitarian crisis.

These conditions will contribute to more people falling into poverty and increasing inequalities, setting the country back by several years. Women are at the forefront of dealing with this crisis in gas queues, queues for essential food items and in protests.

There is now a monumental political crisis even as the economic crisis remains immediate and primary for ordinary people. The urgent need in order to perform those duties is for a civil, democratic governance system that can restore the confidence of the people. In spite of the imminent collapse of the existing Government, the State mechanisms should perform their fundamental duties of ensuring the rights and welfare of the people. All measures demanded below is based on the premise that the Government must prioritise the basic needs of the people.

We recognise that people feel a deep frustration with the political class and emphasise the urgent need for the citizens of Sri Lanka to have governance systems that can restore the confidence of the people. In this context, urgently launching a humanitarian operation, with a focus on preventing national level starvation and chaos is imperative. The Government in all its negotiations within and outside the country, to emerge from this crisis, ‘must’ address these needs by allocating and reallocating resources accordingly.

While the impact of the economic crisis is felt across all corners of the island, it is daily-wage earners, those dependent on micro, small and medium enterprises, the urban working poor and other communities living in poverty along with communities already marginalised for their ethnic, religious, caste, gender and sexual identities that are the worst affected by this deepening crisis. There are people facing homelessness and destitution. For those who were living on subsistence wages, even before this crisis, the rising prices of essential items have depleted monies in hand. Communities affected by repeated tragedies – the long-drawn-out war, tsunami, Easter bombings and the COVID-19 pandemic – are yet again facing a blow to their efforts to rebuild their lives. This while life consuming quests for truth and justice are ongoing every day.

The burden of a flailing economy invariably falls on women as economic risks are pushed into the home sphere. Women face the double burden of earning an income while performing unpaid care work at home. Women struggle to ensure the wellbeing of their children due to obstacles to education, domestic violence, and inefficient and unjust systems of maintenance payments to single mothers. Frustrations and fears of uncertainty, hunger and the lack of basic comforts often translate into violence directed at women and children at home. The limited existing services to address such violence are further stunted due to the pandemic and now the economic crisis.

Deliberate choices made by consecutive governments in Sri Lanka has placed us in this calamity. This country has been overwhelmingly dependent on women’s labour, including for the country’s foreign exchange, through the plantation, garment and migrant labour sectors. Simultaneously, Sri Lanka’s economic policy has impacted women’s labour and every sphere of women’s lives – their material conditions, mobility, aspirations, and social status. It is the wealth gathered by exploiting women’s labour that has been squandered. No one is held accountable for this loss. Instead, yet again, women are forced to bear the brunt of an economic crisis.

The Government’s responses so far are limited to obtaining loans to address the debt situation and approaching the International Monetary Fund (IMF) for assistance. We are concerned that actors such as the IMF and others may enforce fiscal consolidation by way of austerity policies. They have often assumed this to be a viable strategy to make debt sustainable. However, regressive tax policies such as the increase of direct tax via VAT, and cuts in public expenditure will only undermine improvements in productivity and deter inclusive economic growth along with a robust social infrastructure. Investment in health, education and care services are imperative to improve human productivity and wellbeing.

Analyses of this economic crisis are dominated by neoliberal economists and mainstream macroeconomic narratives. These have largely dehumanised the crisis thus yielding responses that do not address the pressing concerns of women, working people and marginalised communities. We are seriously concerned about the longstanding causes for the crisis, such as corruption in public enterprises and failure to introduce progressive tax policies. While these remain unaddressed, we anticipate attempts to privatise public services which will, again transfer economic burden on to the people.

In this context, urgently launching a humanitarian operation, with a focus on preventing national level starvation and chaos, in partnership with the Government and civil society is imperative. All measures demanded below is based on the premise that the Government must prioritise the basic needs of the citizenry. The Government in all its negotiations within and outside the country, to emerge from this crisis, MUST address these needs by allocating and reallocating resources accordingly.

We urge the Government to take the following steps immediately to address the unfolding humanitarian crisis:

1) Plan and implement an island-wide food distribution system: A food distribution system to reach all households with basic essential ration packs – this should include rice, oil, sugar, tea, dhal and triposha. Existing systems of Sathosa, Samurdhi and Cooperatives should be strengthened to reach everyone. As the number of people living in precarious situations and falling into poverty is increasing, the food distribution system should be universal. Implementing ‘targeted’ programs to ‘reach only the selected poor’ as recommended by certain advisors fails to respond to the reality and targeted actions in the midst of spiralling poverty will only delay relief and further harm people. Targeting will also deepen social divisions and fire tensions further in a context of already existing frustrations.

2) Prioritise nutrition and food sovereignty: Ensuring food security through controlling kerosene and gas prices; urgent support and subsidies to farmers; and relief for fisheries and other farming communities must be implemented immediately. The 2022 budget promises in relation to nutrition and food security, such as the nutrition basket for pregnant and lactating mothers, for 24 months must be implemented. Promises of a relief basket to alleviate the pressures of rising costs of living, ensuring school midday meals program and household level relief for children must be activated.

3) A people-centred Samurdhi support system that upholds its original vision must be strengthened: Samurdhi benefits are being cut in many districts and different excuses given at community level. The Government must respond to the reality that more families are falling below the poverty-line and expand Samurdhi benefits and increase monthly Samurdhi payment to match the rising cost of living.

4) Health sector must be supported by the State to secure and provide medicines, other essential medical equipment, health products and reproductive health services

5) Assistance programs (referral, support and services) to address starvation, homelessness, destitution and domestic violence: The Government must set up urgent support schemes to address issues of starvation, homelessness, destitution, and domestic violence. State officials must be directed to provide these services without discrimination, prejudice, and judgment. As the increase in sexual and gender-based violence becomes inevitable, state and non-state services should ensure support services including women and child centred shelters. Responses must be timely and have a survivor centred approach (protect rights, privacy, recovery of victim to build victim confidence, without any blaming or shaming or tolerance of retaliation).

7) Prioritise labour and land policies that protect people’s financial security: Successive governments have failed to address the need for a land policy that addresses people’s needs, aspirations, the climate crisis and the need for a people-focused labour policy. During this crisis, given the strong tendency to move towards exploitative measures, existing labour protections and land rights should not be undone. Distribute land to women smallholder agricultural farmers who are producing essential grains.

Finally, we invite women’s groups, trade unions, farmers’, and fisher’ collectives, cooperatives, religious institutions, NGOs and progressive political movements to join in solidarity for urgent action to respond to the unfolding humanitarian emergency that is threatening to destroy our collective futures for generations to come.

4. Centre for Women and Development, Jaffna

Tue Apr 12 , 2022
Jason Ravnsborg is proven in this 2019 file image. PIERRE — On the eve of a vote to authorize articles or blog posts of impeachment from Jason Ravnsborg, the South Dakota lawyer normal broke months of silence on the concern. Ravnsborg’s spokesman released a letter to South Dakota lawmakers Monday […] 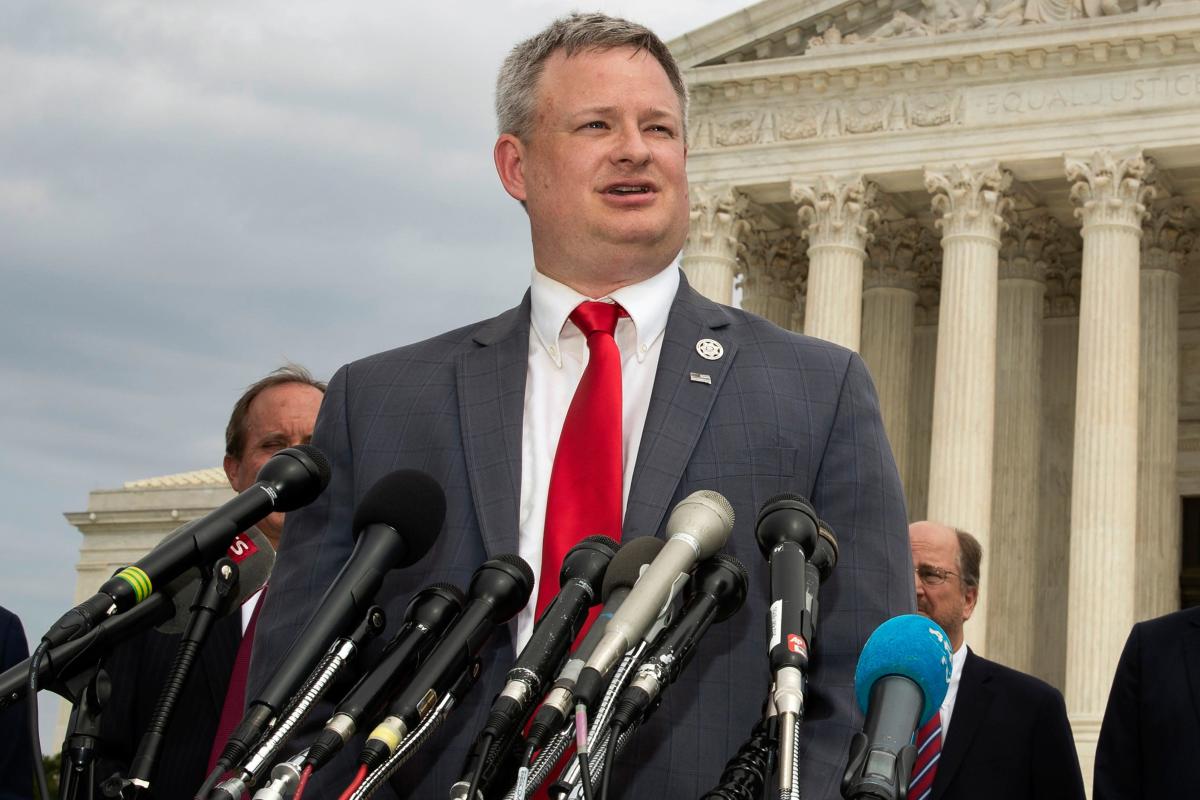